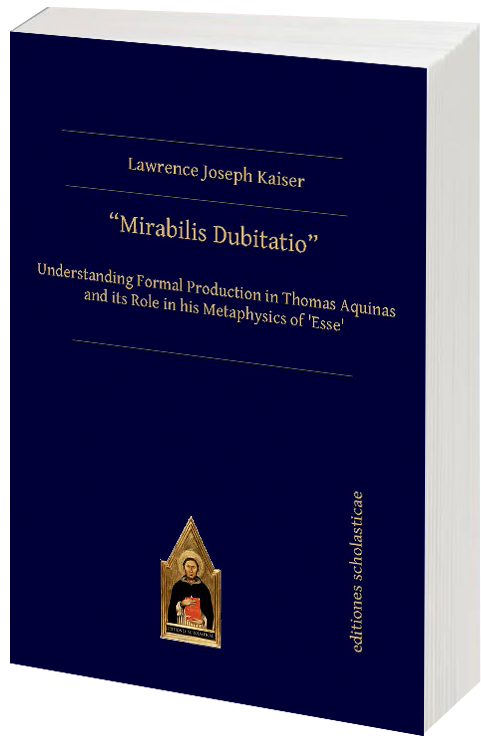 Abstract
Amid the so-called “crisis of metaphysics” of the last several hundred years, philosophers in the 20th century re-encountered – and began a reappreciation of – the mediaeval thought of Thomas Aquinas. This crisis can be traced, at least in part, to modern Western philosophy’s rejection of a specifying or “formal” cause in metaphysical analysis. Drawing from Aristotle of Stagira, Aquinas placed the formal cause on prominent display as the foundation for his metaphysics of esse. Yet nowhere did St. Thomas offer a systematic presentation of the key elements for this central doctrine. In response to this absence, Mirabilis dubitatio presents the reader with the doctrine’s fundamental passages gleaned from Aquinas’s entire opera omnia, as well as a systematic analysis of the doctrine which Aquinas himself called, a topic of “wondrous difficulty”. Kaiser’s work argues this central feature of Aquinas’s thought – the formal cause – must be reintegrated into any metaphysical analysis in the 21st century. Such a reintegration can only begin through a presentation and understanding of Aquinas’s coherent account as presented here.

About the Author
Lawrence J. Kaiser is an instructor of philosophy in the Washington, D.C. area. In addition to Thomas Aquinas, his other philosophical interest is in the influence of eastern philosophical concepts on western ideation and, more broadly, the genealogy of ideas. He will soon publish a translation and critical edition of John Quidort’s De formis, an extension of his research here in Mirabilis Dubitatio.